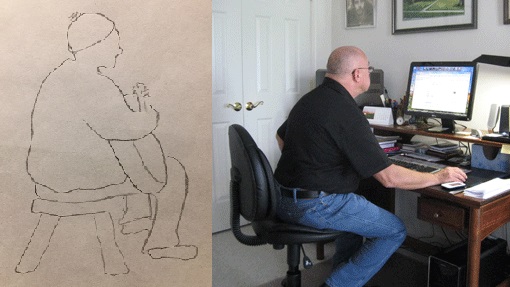 Do you suffer from “guitar neck” or “computer neck”?

There is a lot of talk these days about “text neck,” the phenomenon of necks bent forward at the base of the neck and the resulting crick in the neck. It’s not just when we use the cell phone that it happens, though. It can happen when we’re sitting working at the computer, eating, walking or playing an instrument.

In our modern lives, we human beings tend to rely mostly on our sense of sight. And what we see in front of us – such as a computer or phone screen, where we want to get to (I’ll talk about that more in another blog), a sheet of music or a guitar, for that matter – is usually enough of a stimulus that we push our heads forward toward it.

This way of holding the head is further complicated by a tendency to collapse the chest forward. The result is compression of the cervical vertebra (not to mention the rest of the spine).

I see this postural issue often in people when they sit at a computer and people who play the guitar. In fact, it’s a very common pattern of misuse of the head and spine, but in these two activities it is particularly pernicious. The two pictures above demonstrate what I mean. Have you seen other people doing this? Have you noticed your self doing this?

A guitarist came to me for classes as she suffered from neck and back pain. It was clear from how she sat in a chair that what she was doing to her self habitually was causing the pain. Her chest and throat collapsed forward while her lower back pushed back and her head tilted back and down. She thought she shouldn’t sit like that, but struggled to “sit up straight.”

She gradually learned to direct her head up and away from her body, allowing it to balance on top of her spine. She began to recover the innate springiness of her spine as her postural muscles began doing their jobs. Her back recovered its length and her shoulders have opened up naturally without her having to push them back as she was attempting to do. And then she discovered a funny thing the other day: she was tilting her head upward as she went about her day. And that she could stop doing that and let it rest on top of her spine so she could easily see forward. Why was she doing that? She was so used to having to look up due to her collapsed back and neck (and thereby compressing her neck), but now she didn’t have to do it anymore. She was elated by this newfound ease.

If you have the habit of holding your head in this way, you probably experience some back and/or neck pain and stiffness. But what to do about it?

Three principles of the Alexander Technique can help with this problem.

The first thing to do is: do nothing! Wow. How many articles do you read that will tell you to do nothing about your problem? Well, actually, doing nothing is really something! (Even on a cellular level, but that’s a subject for another blog, too.) The reason is that when we perceive something about our selves to be “wrong,” we tend to react by correcting it – with muscle tension. So by not reacting automatically to our critical thought about how “bad” our posture is, we avoid adding additional tension to an already stressed system.

So this step was actually two in one. One: don’t react. Two: observe.

The third step is to send your head up and away from your tailbone as you send your sit bones downward so that your back lengthens and widens. (I say “send,” but really we want to allow it to happen.) Think of sending your throat back and up toward the base of your head. We’re practicing non-doing, but it’s fine to move. Just let your movement be guided by the idea of allowing your head to move up and away instead of moving to correct your posture. Directing is a kind of non-doing that allows us to gradually redistribute muscle tension in such a way that our back supports us and our head rests easily on top of the spine. The contact used by an Alexander Technique teacher helps you to learn this skill.

You might say, well it’s one thing to sit there and think about that, and it’s another thing entirely to put it into practice as you do an activity like looking at a computer screen or playing a guitar. This is true! But like any skill, it takes practice. Just continue to gently remind your self and celebrate when you remember!

If you’d like to learn more, you can subscribe to my newsletter, read past articles here, join the Mind-Body Freedom & Balance with Alexander Technique group in Facebook to read occasional tips and ask questions, or write me at info@discoverease.how to take an online constructive rest mini-lesson or a full online lesson. I’ll also be offering classes and workshops again next year when I get back to Montana. (I’ll be back for a couple weeks at Christmas and then May through September.)

If you have any questions or issues you’d like me to write about, please write me at info@discoverease.how  or post something in the Facebook group! I look forward to hearing from you!